Fortresses, palaces, churches and mansions frame the grand plazas of this Spanish colonial city which has barely changed since the 19th century. It’s a UNESCO World Heritage Site and is the main focus for tourists to the capital, with buzzing streetlife and iconic sights.
2 Las Terrazas

Part of a Biosphere Reserve in the Sierra del Rosario, Las Terrazas offers birdwatching and hiking amongst tropical forests, old coffee plantations and waterfalls. There’s an orchidarium at Soroa nearby.
3 María la Gorda

Very remote and low key, this dive resort offers pristine reefs, caves and tunnels with an abundance of sea life. Part of the Península de Guanahacabibes, a Natural Biosphere Reserve, it is also popular with keen naturalists and beach lovers.
4 Valle de Viñales

Declared a UNESCO World Cultural Landscape, this beautiful valley in Piñar del Río province is characterized by steep-sided limestone mogotes that rise out of the red earth, surrounded by tobacco fields ploughed by oxen.
5 Bay of Pigs

The site of the botched CIA-backed counter-revolutionary invasion in 1961 is now a prime dive site, teeming with tropical fish. The surrounding Zapata Peninsula is a national park whose swamps and lagoons are home to crocodiles and migratory water birds.
6 Cienfuegos

A port on the south coast, Cienfuegos’ wealth from trading can be seen in the lavish mansions and eclectic architectural styles of its 19th-century buildings.
7 Santa Clara

The decisive battle of the Revolution was fought here under the leadership of Che Guevara. A huge monument, mausoleum, and cemetery mark his last resting place and commemorate his fallen comrades from both Cuba and Bolivia.
8 Remedios

A charming old town, known for its Christmas festivities, Remedios is within easy reach of the northern cays and of Santa Clara to the south. It is a pleasant place to stay for a few days in a boutique hotel or a casa in particular.
9 Trinidad 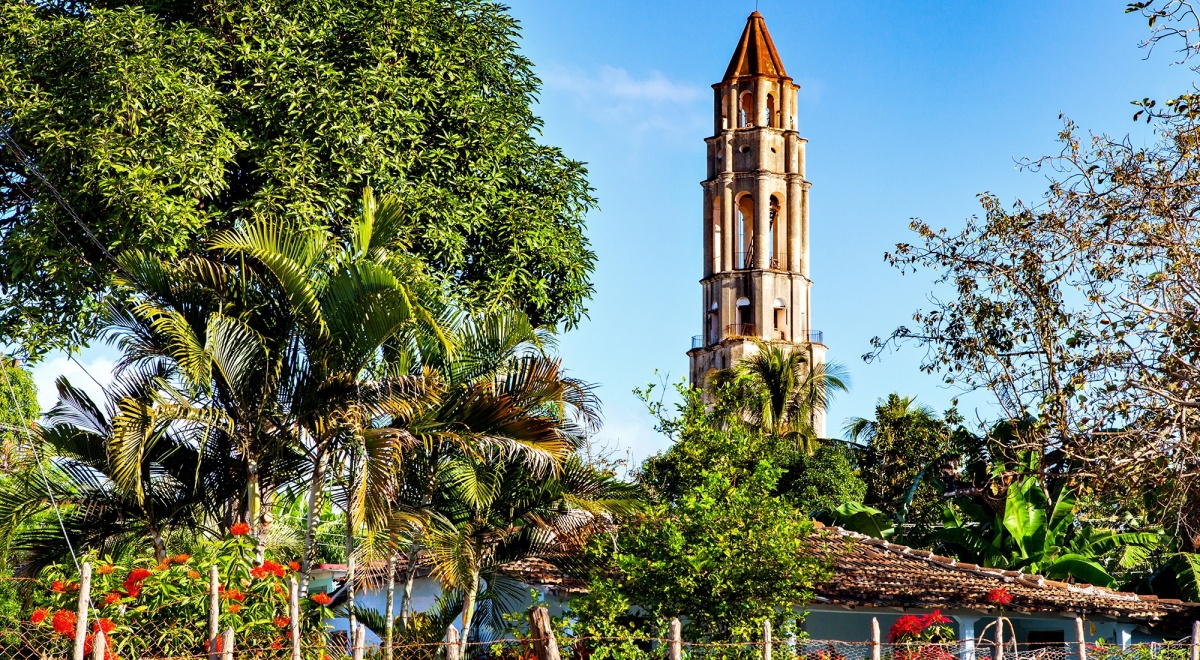 Frozen in time, with its cobbled streets and tiled roofs, Trinidad has remained unchanged since the sugar barons left in the 19th century. Now a UNESCO World Heritage Site, it is one of the leading tourist attractions on the island.
3 12 1 595789235 Lena Wurm 72
10 Camagüey

Magnificent 18th-century churches and plazas characterize this colonial city, known for its maze of streets built at odd angles to deter pirate invasion. To the north are several lovely beaches and cays that are home to flocks of flamingos.
11 Coast of Holguín

The beautiful bays and inlets at Guardalavaca have been developed as a major resort. In contrast, Gibara is a quiet and unassuming fishing town, with caves and unspoiled beaches to explore. There are also several Amerindian sites you can visit.
12 Sierra Maestra

Hike to Castro’s secret revolutionary headquarters in the mountains at Comandancia de la Plata, or do a two- to three-day trek up Pico Turquino, the highest mountain in Cuba, for tremendous views.
13 Santiago de Cuba

This is the hottest city on the island, both in terms of temperature and in the vibrancy of its music. Cultural activities reach a crescendo in July for a month of festivals and carnival celebrations. Spruced up for its 500th anniversary in 2015, Santiago is a gem.
14 Baracoa

The first town founded by the Spanish, but accessible only by sea until the 1960s, Baracoa has an air of self-sufficiency born of isolation. Seafood, coconut and cocoa provide welcome sustenance after a day’s hiking in the surrounding hills and forests.

7 Best Things to See and Do in Barbados

10 Best Places to Visit in India

News admin - July 10, 2014 0
With the recent trends in technology, the respective boards managing the issuance of gorilla permits in the different countries where gorilla tracking takes place...

News admin - June 1, 2014 0
Rwanda Development Board (RDB) has revealed that visiting the mountain gorillas has greatly contributed to increased revenues to the country which has helped in...

News admin - May 14, 2014 0
This superb Southern African Python was seen by our inaugural ‘South Africa – Reptiles, Amphibians & other Wildlife’ tour group during a visit to...

News admin - January 19, 2013 0
Rwanda has been ranked among the top 10 world adventurous places for 2013, according to Globe Spots, an international travel guide for tourists. Canopy...

News admin - March 17, 2011 0
As fears about nuclear radiation increase in the aftermath of the Japanese tsunami disaster, several airlines have re-routed flights to the country. Lufthansa has...